Posters and reviews from concerts Melissa has played in. 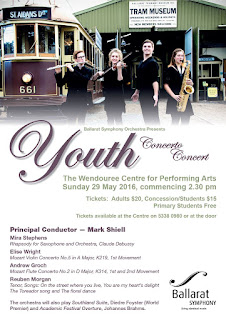 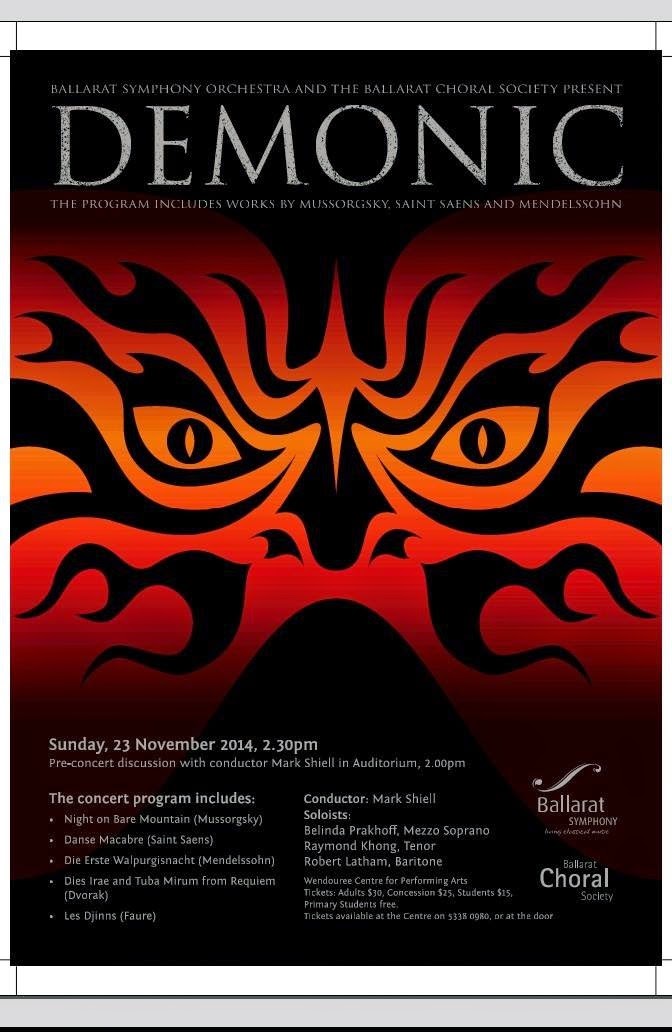 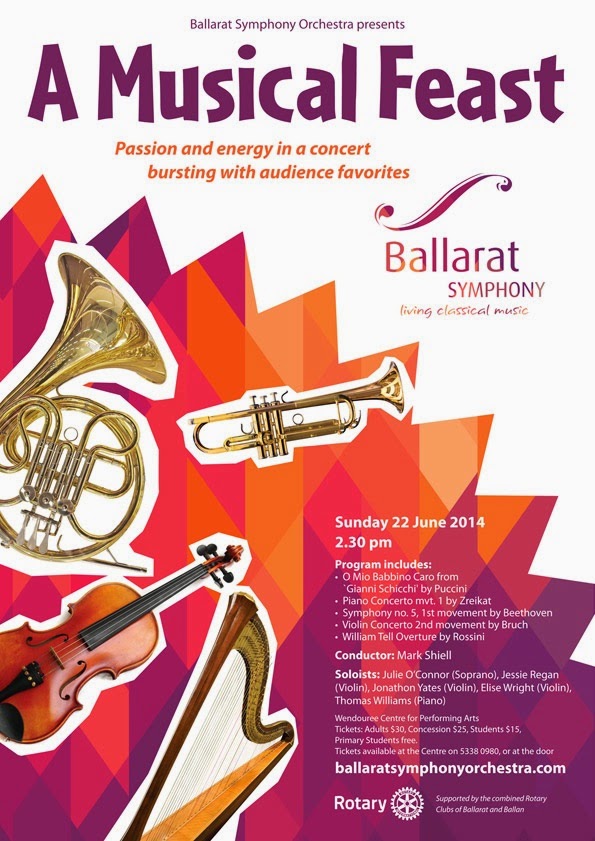 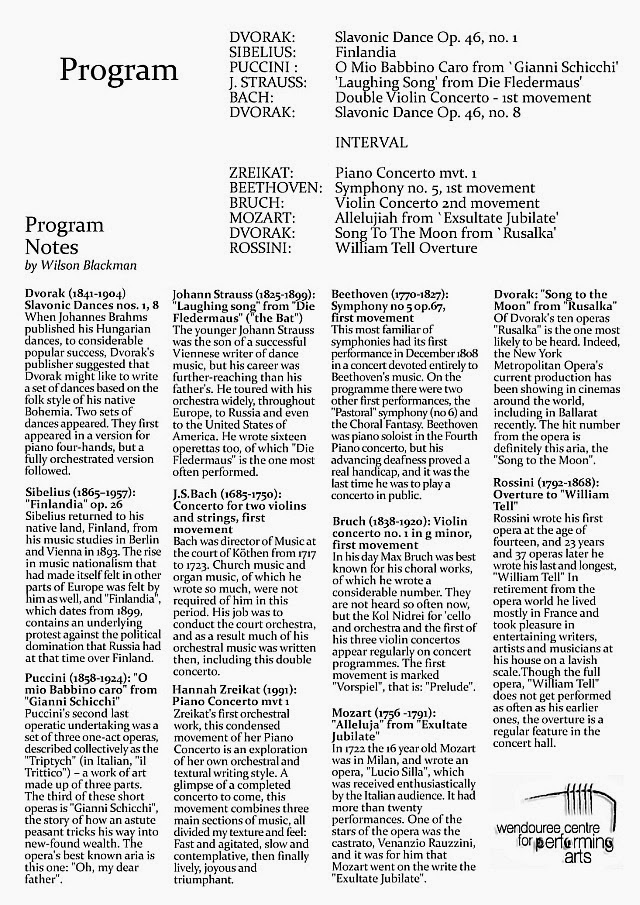 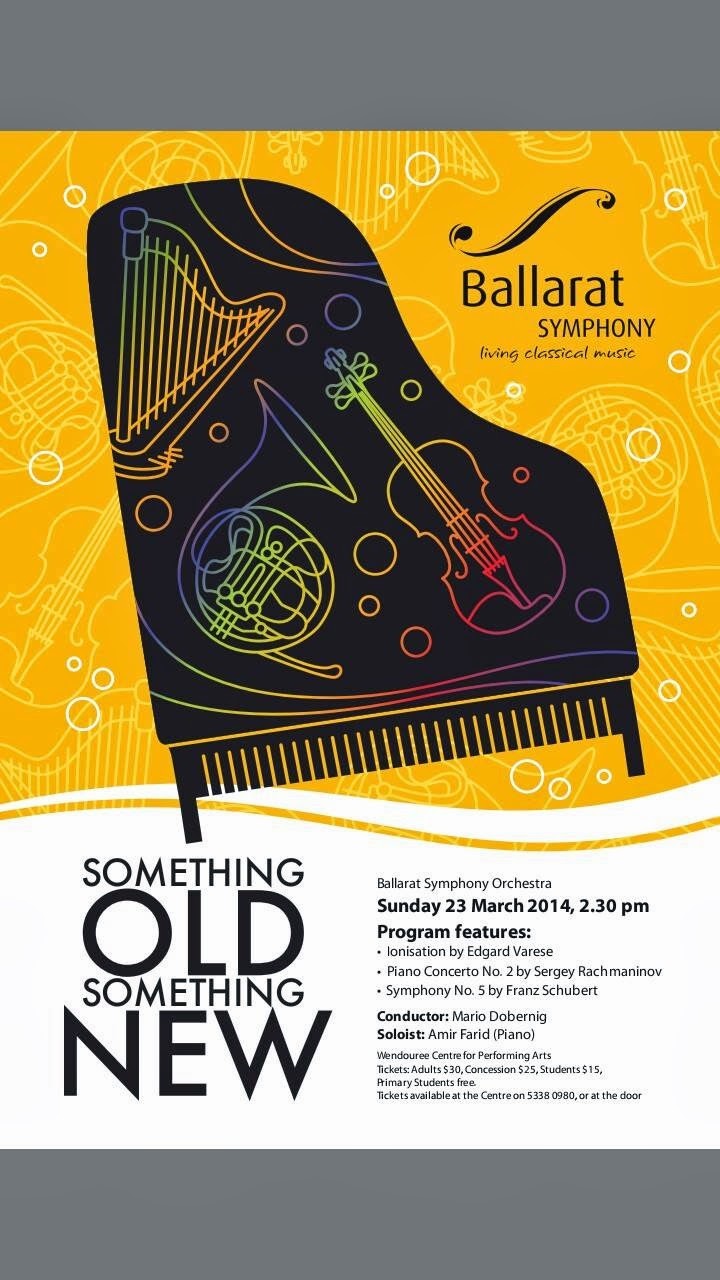 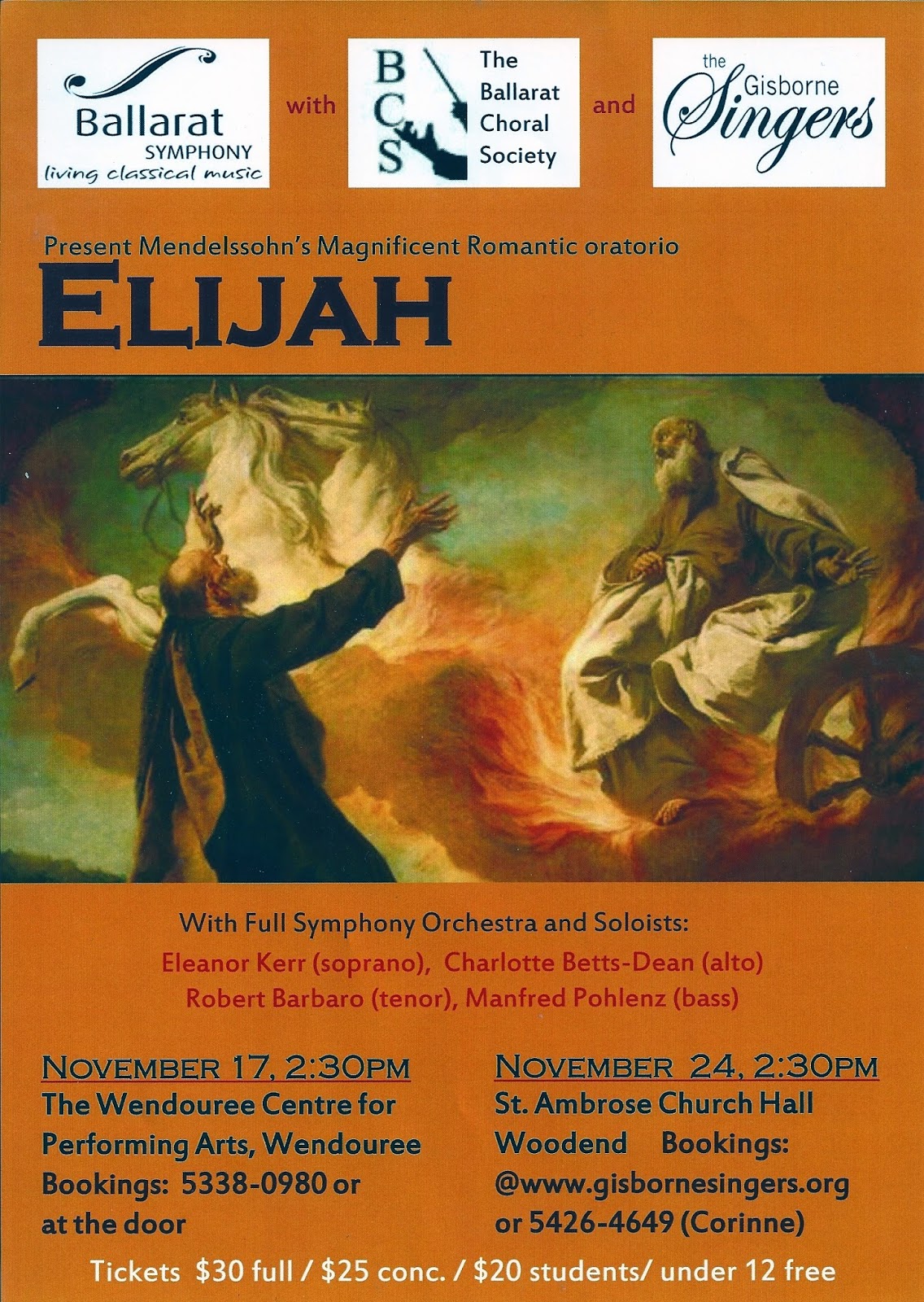 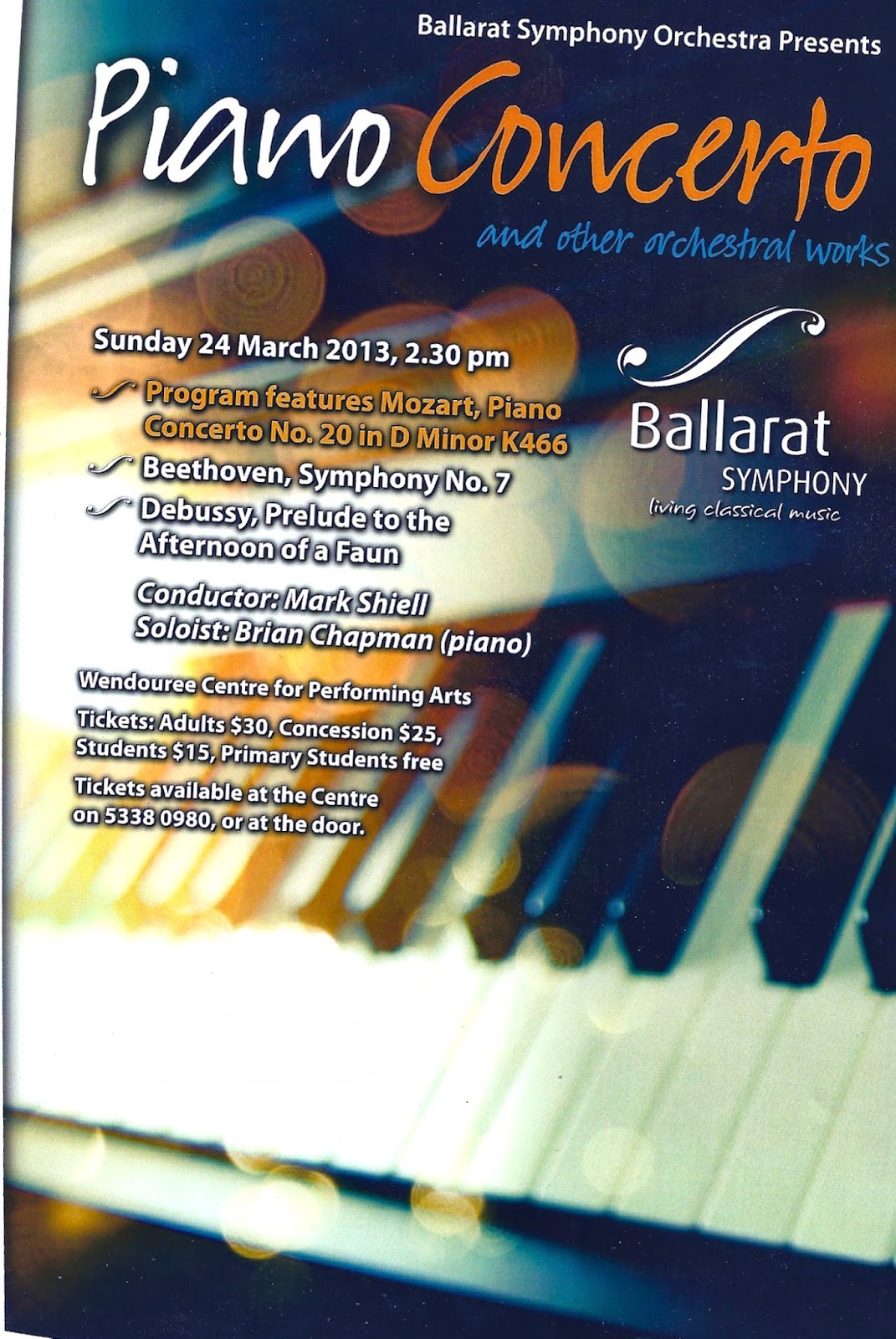 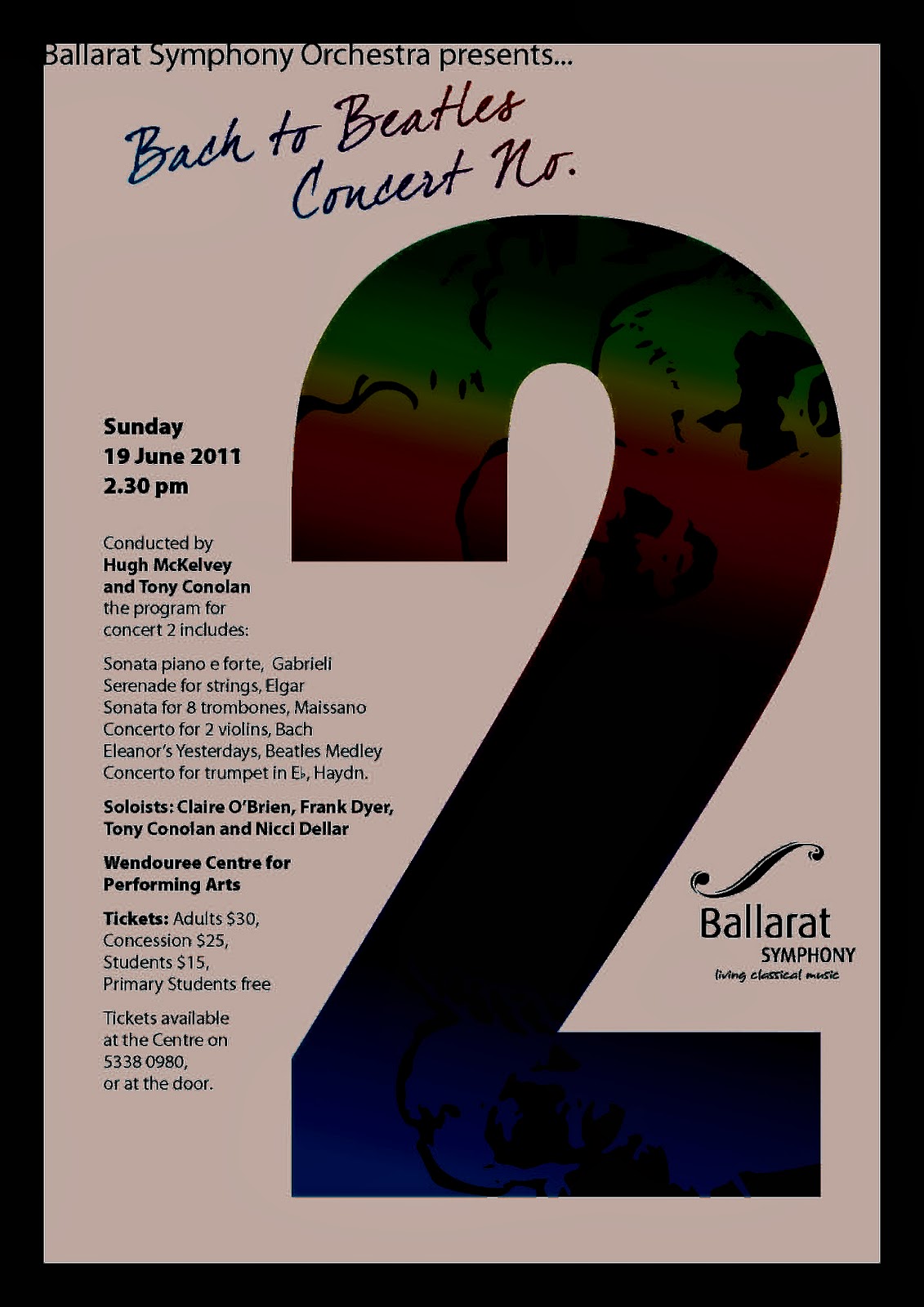 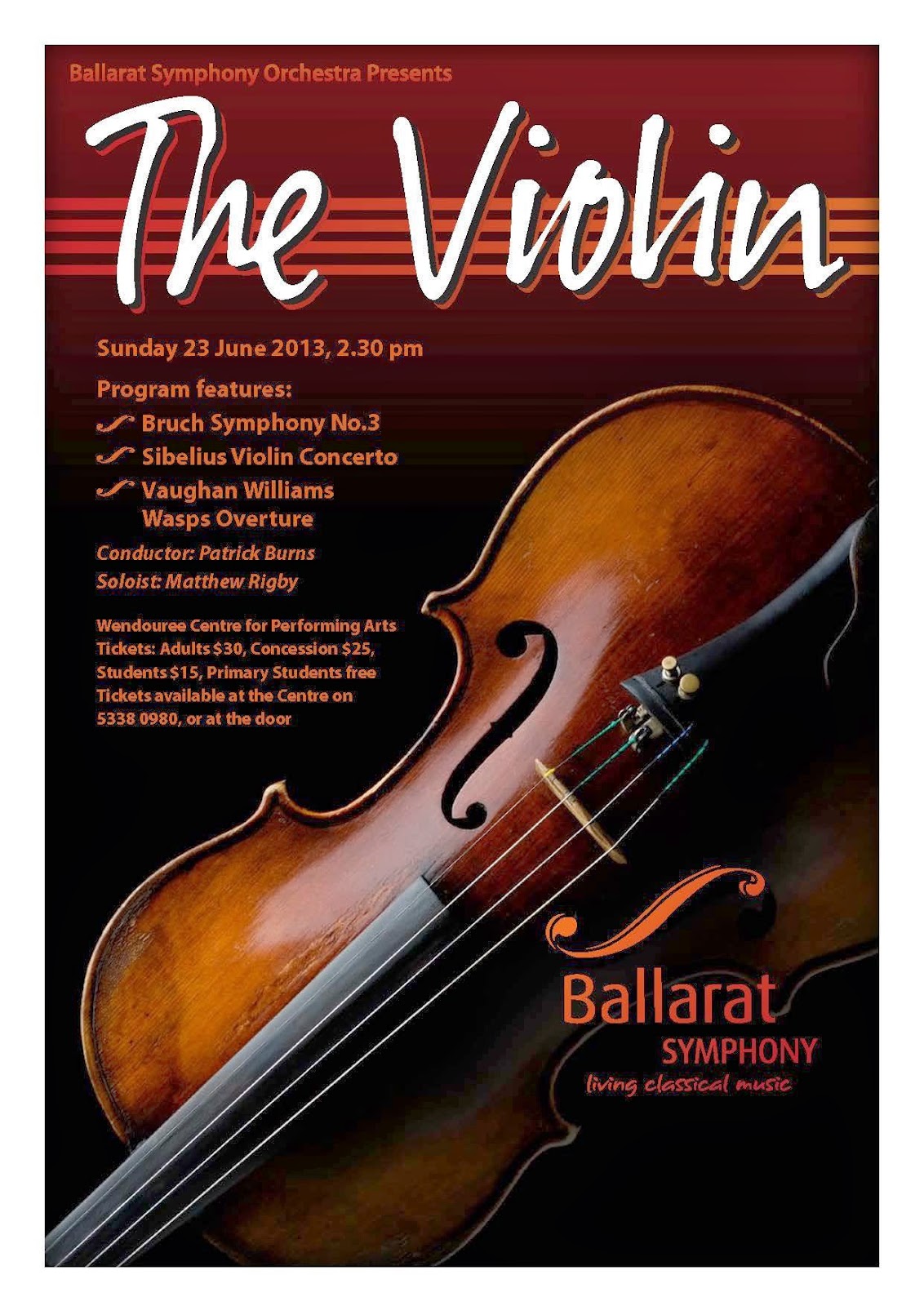 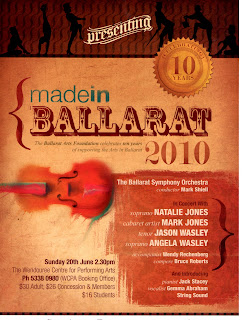 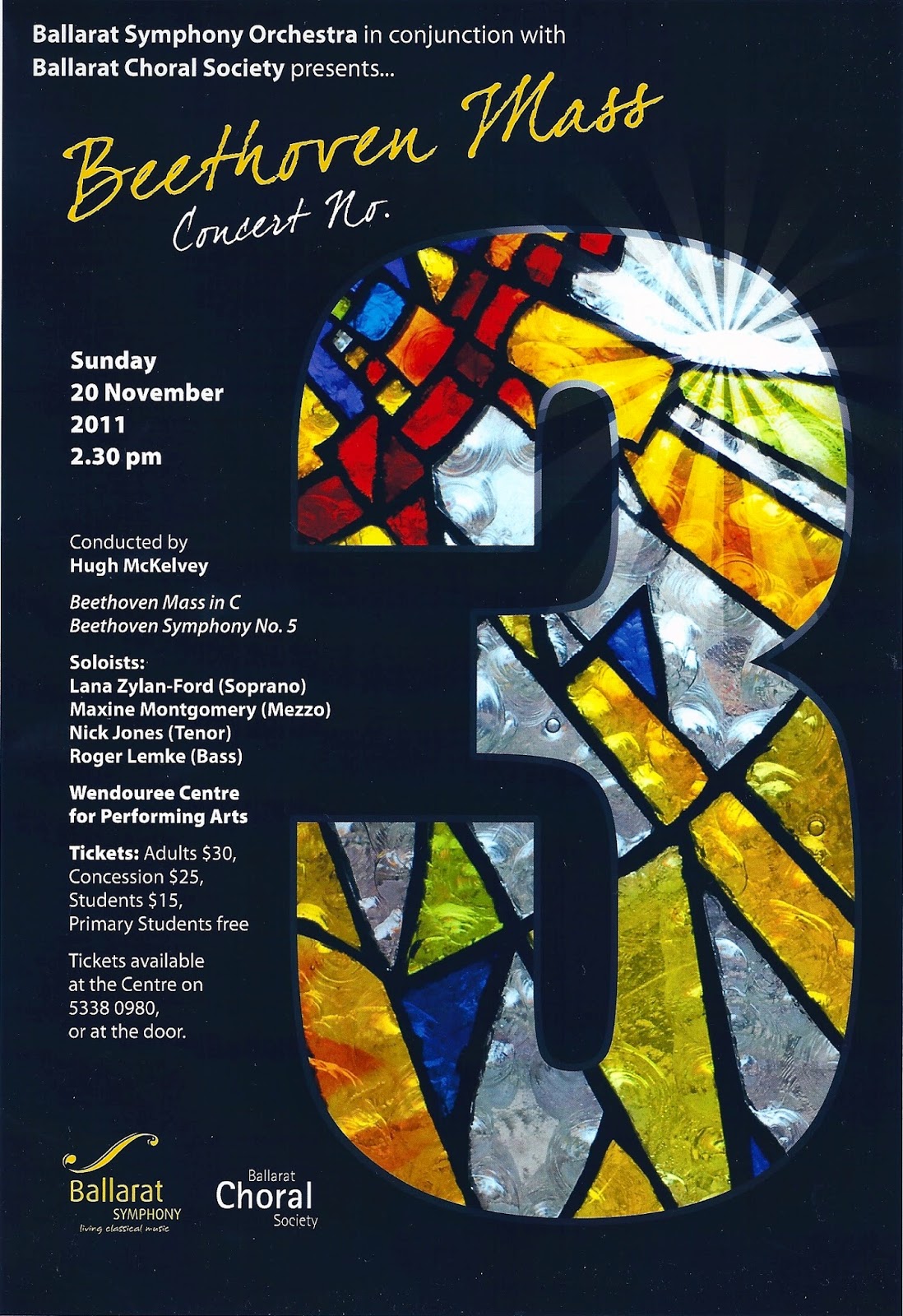 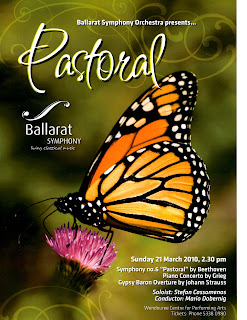 Made in Ballarat  2010 celebrated ten years of supporting the Atrs in Ballarat in partnership with the Ballarat Symphony Orchestra. Featuring established and emerging artists 'made' and nurtured within the vibrant arts community in the city of Ballarat. Presented by Ballarat Atrs Foundation Inc. 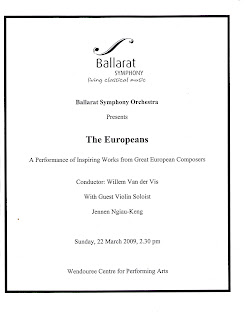 This lengthy work also contains significant lyrical passages, particularly well handled by the winds. The Italian flavour continued with Mendelssohn's exciting and much-loved Fourth Symphony.
The rhythmic energy required for the outer movements was achieved with ease, acknowledging the dance characteristics.
The Tchaikovsky Violin Concerto was the major work in the program, with a superb effort from soloist Jennen Ngiau-Keng. Displaying flawless technique, he shaped the phrases with great subtlety. The precise handling of the harmonics was exquisite, while the communication between orchestra and soloist gave the performance a sense of completeness.
The finale was Massenet's delightful Meditation from his opera 'Thais'. The ethereal character, created within the soaring melody, was perfectly realised in another fine display by Jennen Ngiau-Keng.  'Ballarat Courier' 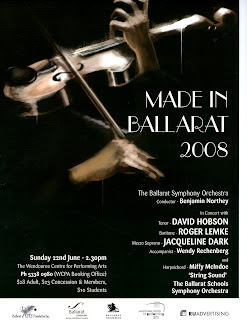 Sell Out Success
The 'Made inBallarat 2008' concert was a sell out success with
the amazing talent of tenor, David Hobson, baritone Roger
Lemke and mezzo soprano, Jacqueline Dark. The orchestra was lead by Benjamin Northey originally from Ballarat. Benjamin had just returned from a 'International Conductors Academy' which included mentorship with the 'London Philharmonic Orchestra' to lead the Ballarat Symphony's 'Made in Ballarat 2008' concert. 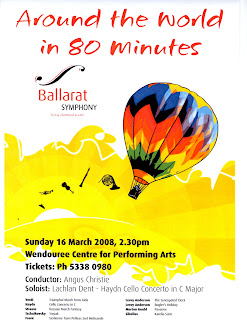 Musicians in fine form with family fare
Who:Ballarat Symphony Orchestra's Around the World in 80 Minutes concert
Reviewed by: Hugh Mc Kelvey
Around the World in 80 Minutes was the theme of the Ballarat Symphony Ochestra's most recent concert given at the Wendouree centre for the Performing Arts. A potpourri of shorter orchestra works, it featured as a centre piece a lyrical and assured performance of Haydn C major cello concerto by lachlan Dent.
The rest of the program, under the firm and considered control of conductor Angus Christie, was a mix of light orchestral pieces and popular classics.
Two of these featured the orchestra's brilliant trumpet section in music lifted from Verdi's opera 'Aida,' followed by Leroy Anderson's well-known 'Bugler's Holiday'.
Poetic and understated performances of the Faure 'Sicillienne' and Morton Gould's quirky and unique 'Pavane' were then heard. The concert then wound up with a strong performance of Sibelius' popular 'Karelia suite'.
The large and varied audience was clearly delighted with what they had heard, further evidence that our local orchestra is in the best of musical health.      www.thecourier.com.au 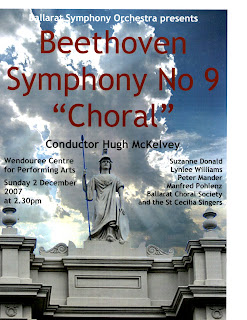 Beethoven Brought to Life
Beethoven was brought back to life with the performance of his 'Ninth Symphony' conducted by Hugh Mc Kelvey.
The Ballarat Symphony Orchestra along with the Ballarat Choral Society and the St Cecilia Singers put on a truly
moving performance. The concert featured well known
soloist, soprano Suzanne Donald, alto Lynlee Williams, tenor
Peter Mander and Manfred Pohlenz.
Ballarat Courier 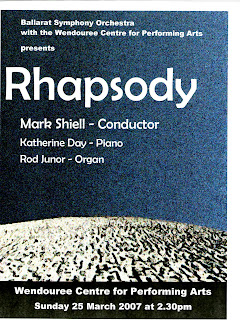 Glorious Energy on Stage
Review by Bronislaw Sozanski
A significant event took place last Sunday afternoon at the Wendouree Centre for Performing Arts. The Ballarat Symphony Orchestra's first concert in 2007 was the start of a new sense of development for the orchestra. This was most obvious in the positive energy flowing from the mucicians in a delightfully varied program, featuring the venue's newly installed electronic organ, and the marvelous Steinway concert
grand piano. Organist Rod Junor began the concert with a demonstration of some of the possibilities of the organ, including Bach's Toccata and Fugue in D minor and Viere's Westminster Carillon.
Katherine Day was the piano soloist in Gershwin's Rhapsody in Blue, with conductor Mark Shiell moulding a precise and purposeful reading of this popular work. The sparkling piano work was supported by well defined orchestral colours as
all players contributed to the tight ensemble. At last Ballarat has the proper facility for a piano concerto.
Music for a Graduation, composed by Rosalie Bonighton, opened the second half of the program. The sense of occasion was obvious throughout, with a wide palette of orchestral sounds and the compulsory reference to Gaudeamus Igitur.
The concerto for Organ and Orchestra of Poulenc was outstanding, with good balance achieved between the soloist and orchestra.
The positive and energetic nature of the concert was summarized in the final work, the overture to Rossini's opera, The Barber of Serville. The comic element shone through as the musicians communicated their joy to the last note. 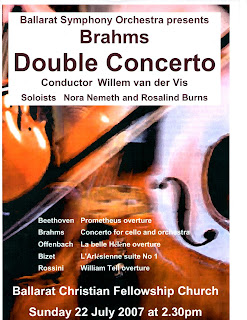 Orchestra in Strong Show
Review by Bronislaw Sozanski
The Ballarat  Symphony Orchestra, conducted by Willem van der Vis, put in a strong performance at the Christian Fellowship Church last Sunday afternoon. The development of this orchestra over the past 12 months has been an exciting journey, particularly with the strings growing in numbers and quality. The enthusiasm and energy have always been there, but there is a robustness in the playing which inspires confidence and security in tackling more challenging material.
Overtures provided the start, middle and finish of an orchestrally colourful program.
Beethoven's The 'Creatures of Prometheus' gave the concert a dramatic opening. Secure rhythm and intonation were a feature of this performance, with seamless shifts through the various sections.
Similarly, Offenbach's 'La Belle Helene' Overture had a sense of purpose, but with the addition of some delightful orchestrations.
The main work on the program was the concerto for violin and cello of Brahms', with soloists Nora Nemeth cello and Rosalind Burns violin.
The highly complex writing demands a disciplined effort from all musicians, plus an empathetic relationship between the soloists. The result was outstanding. Both soloists maintained the shape of the music with skill and confidence, with the cello projecting exceptionally well. The orchestra remained composed throughout, a tribute to the skill of the conductor.
Bizet's 'L'Arlestianne Suite no. 1' gave all sections of the orchestra the opportunity to shine. The broad orchestral palette was well executed, with only a few insecure moments from the strings in the quiet sections.
The concert closed with Rossini's 'William Tell Overture', justifiably one of the most popular pieces in the repertoire. The cello and cor anglais solos were skillfully handled, while the storm and finale sections were driven with great energy to a satisfying conclusion.

Tour To Austria July 2nd -17th 2011
Melissa is one of the group of  40 plus Ballarat musicians who have been chosen to tour Austria next year. Under conductor Mario Dobernig they are all looking forward to this exciting adventure. They will visit Vienna, Salzburg and Graz as well as some other country areas. Melissa feels extremely privileged to have been selected to take part in this wonderful adventure, with such a talented group with amazing expertise and capabilities.

Melissa and forty other classical musicians will be touring Austria in 2011. They will be under the carful guidance of Mario Dobernig and will tour from the 2nd -17th of July. Melissa feels extremely privileged to be invited to take part in this fantastic and exciting venture. All players are from in or around Ballarat they are capable musicians with a high level of expertise. They will perform an exciting and very demanding repertoire that has been carefully chosen by Mario Dobernig. The orchestra boasts an all girl French Horn section! 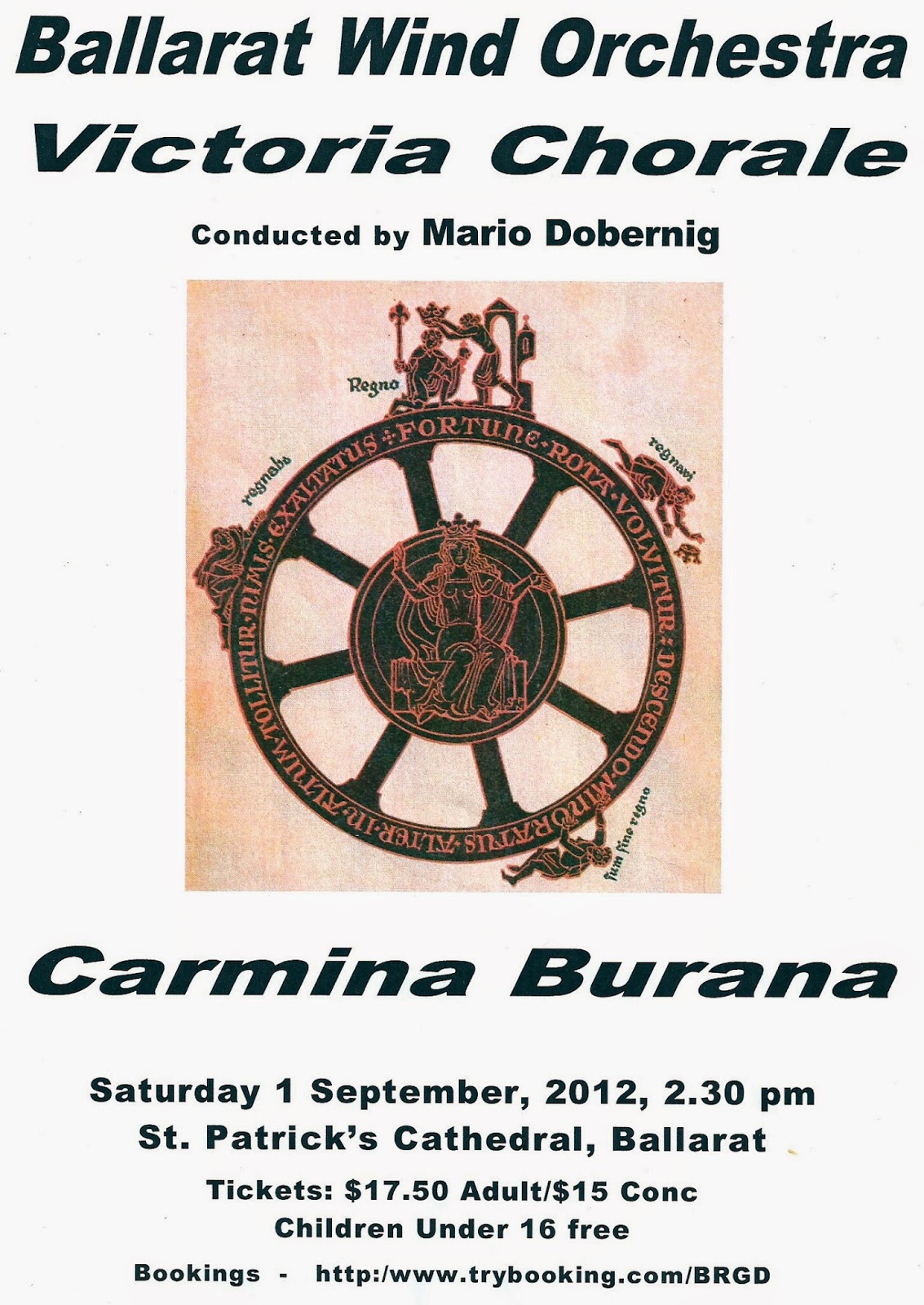 About Me
Daylesford, Victoria, Australia
My name is Melissa and I am a multi-instrumentalist who plays and gives lessons in Piano, French Horn, Trumpet and Recorder. I specialize in a range of styles from Classical with preparation for AMEB exams to Popular Song technique, Jazz and Improvisation. I endeavour to foster individual's passion for music and aim in helping them achieve their individual goals, at a speed and within a genre that is specific and meaningful to them. I teach Music from my studio in Daylesford, as well as home visits in surrounding townships of Ballarat, Castlemaine, Kyneton and Woodend. 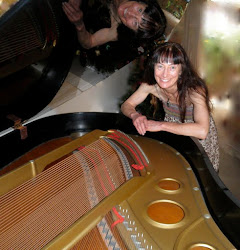 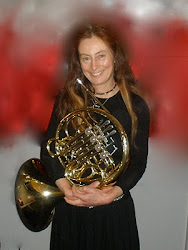